Sharing residence with a community centre and French-immersion school, Alderwoodbranch is located across a wide hallway from Alderwood Pool. A huffing fairy-tale loup could never hope to blow down this huge open rectangle of a library, as its exterior walls are made of giant bricks.

At first I couldn’t identify why this branch seemed so familiar until I realized that it was a school library as well as a Toronto Public Library. The white bricks and the formal atmosphere reminded me of my own elementary school library from back in the day.

In the corner closest to Sir Adam Beck School was a well-stocked selection of French materials for children. A “Class in Progress” sign was at the ready for the beginning of the school day, and as groups of kids arrived at regular intervals, their teachers called for quiet, saying, “Remember that this is a li-brary!”

French books were also plentiful in the general part of the branch, joining a robust Romance collection. 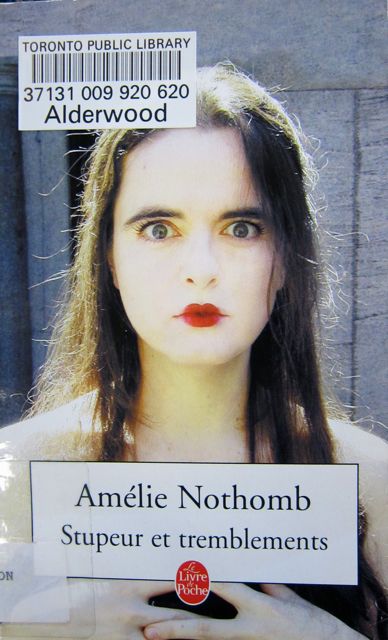 Although Alderwood had initially seemed somewhat institutional, a closer look revealed many craft creations that warmed the place up. They included a cardboard Casa Loma replica, a model forest in a box (complete with rock cave), and a Polish castle with pebbles pasted on the exterior.

On my second visit to Alderwood, I was taken by a woodland diorama with a dinosaur painted to look like a badger or raccoon, a castle with outbuildings made from Hershey’s 100 Calorie Snacks, and a truly wonderful Humber Bay Bridge.

Adding further texture to the scene were two men absorbed in a game of chess, an elderly man sleeping under a life-sized plastic tree, and a masked troll in a chair surrounded by autumnal icons.

As this post nears its conclusion, I’d like to compliment Alderwood Library on its clever hanging rack for ESL kits. These kits come in tough plastic bags with handles that click into place and can be hung from rods. In most libraries, the kits hang all in a row like shirts in a closet, but Alderwood’s rack was designed such that language-learning patrons could easily access the kits from four different angles. Having frequently wrestled with kits mashed together into an unreadable mass, I greatly appreciated this innovation in rack-design.

Even though Alderwood has menacing suitcases and alarming trolls, its accessible ESL rack, charming castles, and generous windows offer much to attract visitors to this branch in the southwest corner of the TPL library map.