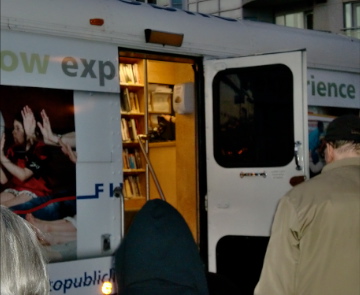 Recently I visited the Bookmobile stop at Queen’s Quay and Bathurst, meeting TPL Communications Officer Ab. Velasco in the parking lot of the OMNI Television building. Through no fault of its own, the Bookmobile was late that evening, its scholarly goods held hostage to rush-hour traffic. I asked Ab. if he thought bookmobiles should be classed as emergency vehicles, and he suggested they should at least have a dedicated lane. Then he briefly left the conversation to apologize on behalf of the library to a small group of expectant patrons.

Fortunately, the eagerly-anticipated vehicle soon came into view. After negotiating the parking barrier, the bus positioned itself in the southeast corner of the lot. Once it was fully parked, a suspenseful pause reigned over the tarmac while we waited for the door to open and the ladder steps to lower.

A collective sigh was released as the last obstacle to the traveling library was removed, spilling a rectangle of light onto the darkening parking lot. About a dozen people had gathered by then, mostly older ladies and a mother with three kids. They clambered up the steps and formed huddles by the shelves of children’s materials, the DVD shelves, and Adult Fiction area. I was impressed by the quantity and variety of items available in such a compact space, including large print books, romance and graphic novels, plus magazines in Chinese, Tamil, Spanish, and Russian. 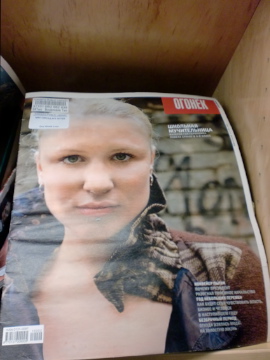 Taking a moment to fully appreciate the Romance section, I sat down at the back of the bus on a red-carpeted bench. My two favourite titles were Along Came a Husband and Lock, Stock, and Secret Baby. I have to say that Sex and the Single Earl had a certain something, too. 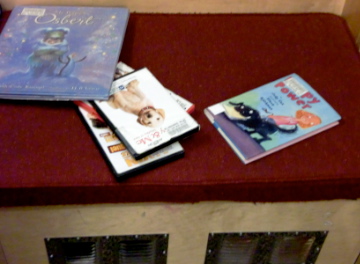 The more time I spent inside this marvel of library outreach, the more I observed the community fellowship it has created. The Bookmobile’s Friday visit appeared to be a social highlight, so I could see why patrons might have felt antsy when the vehicle was ten minutes late that evening.

Everyone seemed to know one another. As the bus gently swayed from side to side in response to the constant shifting of weight on the ladder, patrons greeted each other by name and provided family news updates. When an elderly lady climbed up with her cane, another woman inside entreated her to be careful not to lean backwards. Not far from her, a child was exclaiming, “They have fairy books!”

The driver seemed to be enjoying his job. He was handing out large pieces of stiff paper which folded up to create a model of the Bookmobile. When one kid said he didn’t want one, the driver said (in a kind tone), “Are you too cool for it?”

The captain of this library ship served as its librarian as well; he wore the two hats with ease. He processed the DVD I’d selected, My Brilliant Career, and chatted with me for a bit. I asked him about the Bookmobile’s capacity limit and he estimated about twenty people. He added that the adults tended to “self-regulate,” adjusting their comings and goings to the crowd-level. As for the kids, nothing could stop them from getting at the books!

Realizing I was taking up valuable space, I didn’t spend as much time at the Queen’s Quay stop as I normally would at an immovable library. However, I descended the steps into the parking lot with a strong sense that I’d just experienced something truly special. This lovely library on wheels was tangible evidence of TPL’s commitment to reaching all Torontonians. This is a city where books come to the people if the people cannot easily come to the books.