Here’s a true story that gave me goosebumps. It features a community-made quilt in a library, a random question, family bereavement, and serendipity.

About six weeks ago, I visited Main Street Library and was entranced by a large quilted tapestry hanging on the east wall of the attic. Created in 1984 to celebrate 150 years since the founding of Toronto, the Sesquicentennial Quilt warmed the space with its well-crafted charm. At the bottom of the piece, I noticed the name Hilary Rowland written in thread. I assumed that she had designed the art project, which featured 35 individual blocks in rows of five. 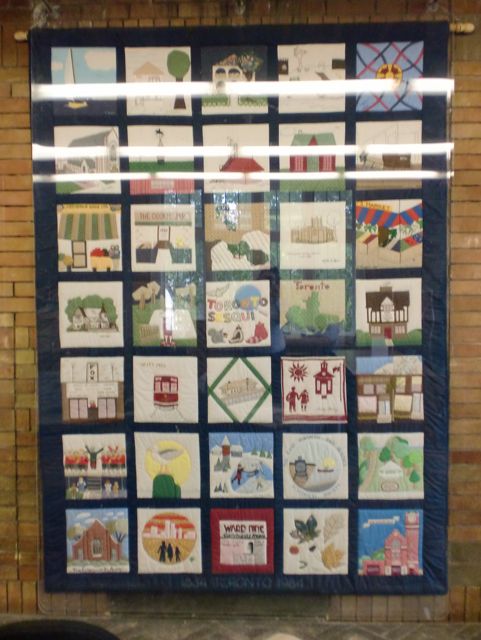 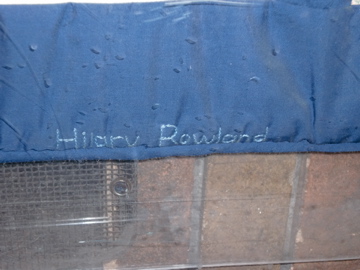 Curiosity about the quilt led to a Google search for Hilary Rowland. No on-line information was forthcoming, so I called Main Street branch to see if the staff had any recollection of her. The person who answered the call couldn’t help me, but she promised to leave a message for Susan Truong, the branch head.

Later that day, Ms. Truong called me at home with the news that none of her colleagues could remember anything about Ms. Rowland. After all, it had been twenty-six years since the quilt was completed.

A few more weeks passed, and then I received another communication from Ms. Truong. Her e-mail stated that she had received a call from Hilary Rowland’s daughter, Susan Plummer, entirely by coincidence. Susan had called Main Street branch to see if the librarians were interested in Sesquicentennial Quilt postcards and posters that she had unearthed while sorting through her late mother’s effects. When Ms. Truong mentioned my query about the quilt’s creator, Susan was touched that someone had shown interest in her mother’s work. She gave the branch head her phone number and said she would be glad to talk to me about the quilt.

When I spoke to Ms. Plummer a few days later, she confided that she had only recently been able to face opening the box containing the Sesquicentennial Quilt’s promotional materials (or any other boxes). Tragically, Susan lost her mother in May and her father in July of this year.

Sharing personal stories with stranger at a time of grief takes courage and emotional generosity. When the memories came tumbling out, it felt like being present with Susan as she opened the box. 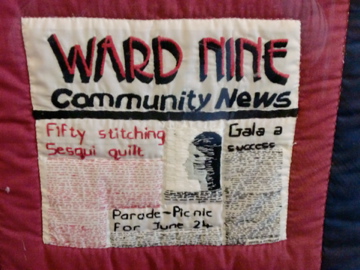 Back in 1984, Hilary Rowland was the coordinator for the Beaches Sesquicentennial Committee for Ward 9. As part of her duties, she recruited approximately 90 volunteers to sew a commemorative tapestry that depicted Beaches images. Each panel was a visual answer to the question, “What do you think of when you think of The Beaches?”

Hilary selected 25 different background fabrics for the quilt, but she left each block’s artistic interpretation up to the person working on it. Hilary must have been a persuasive woman because she managed to convince Beaches residents with variable sewing skills to contribute to the project. Abilities ranged from complete non-sewers to fancy quilters who could pull off reverse appliqués (as seen on the Fire Station #17 block below). 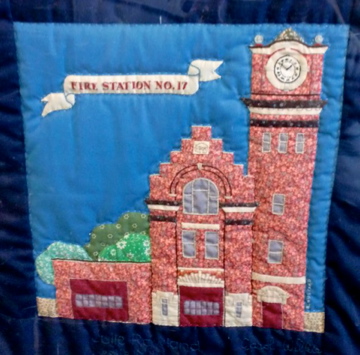 Susan’s mom even got her whole family to join in the quilt’s co-creation. Her husband made the train station panel, and the green diamond represented his perspective as a child looking through the fence at the station. (He had grown up in the Beaches, and so had his future wife, minus the first six years of her life spent in England).

One of Susan’s sisters sewed the lifeguard panel, and the other one made a cloth rendition of Main Street Library. 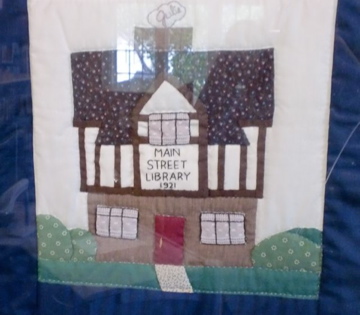 Susan herself, who was 19 at the time, created the seagull square. Her grandparents were responsible for the Woodbine Racetrack block. And Hilary did the Fox Theatre segment in addition to the design and coordination work for the entire project. 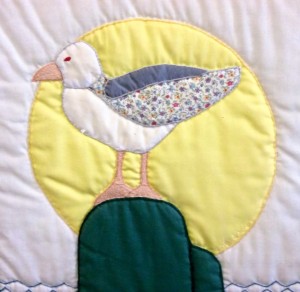 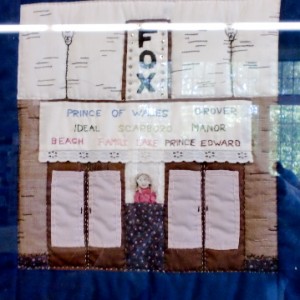 Once all 35 blocks were finished, Susan’s mom experimented with different arrangements before deciding on the final composition. Like a collage artist, she spread all the squares on the floor and studied the colours and themes. She ended up choosing a navy blue border to pull the entire piece together.

Then the quilt was put on a frame in the living room of a woman named Carol Wilkie. The rest of the work was completed by hand on the frame. Carol would leave her door unlocked, and volunteers arrived in shifts. “They’d come in, have tea and cookies, and quilt for an hour,” recalled Susan. (I love the concept of “Come on in and quilt!”).

Susan’s pride in her mother, who had “taken a quilting class and got excited,” was apparent in her voice. She also fondly remembered the community spirit that animated the Sesquicentennial project. Out of the 90 volunteers, she personally knew the ones who had worked on 20 of the 35 blocks.

I’m grateful to Susan Plummer for narrating the origin story of a one-of-a-kind quilt that both enriches Main Street Library and serves as a priceless legacy to Hilary Rowland’s memory, her family, and the Beaches community.

On a personal note, connecting with Torontonians like Susan Plummer and April Quan (the creator of the Deer Park Woolen Castle) has been an unexpected benefit of writing a library blog. If I hadn’t blogged about the Woolen Castle or Main Street’s Sesquicentennial Quilt, I would never have learned that April fashioned the castle from a secondhand wool coat or that Susan discovered historical treasure in a box that was painful to open. 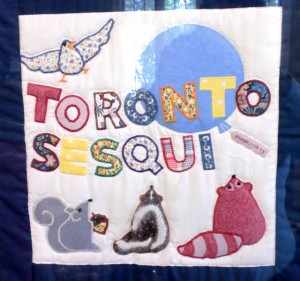 Wow Catherine! Talk about serendipity. Amazing when you throw your passion – writing about the libraries -into something what miracles evolve!! Would not Grandma love this story! And I could just hear her talking about how much she enjoyed reading about the libraries, what a wonderful writer you are, and how she just adored you. She would talk to me that way about you. AND I really love…the c’mon in and quilt idea! This is a beautiful piece that you have written and it gave me goosebumps also!! It makes me want to put Toronto at the top of our travel list or even our list of places to relocate…..With much love, Your cousin Dee

Your lovely comment made my day, Dee! Hooray! I think Grandma would have loved the story, too. Hopefully quilters are becoming more and more recognized as true artists. Come on up to Toronto and come on in and quilt!

Thank you for writing this story. It is wonderful to know that my mother’s hard work is appreciated, she lives on!

You are super welcome, Sara! It was a honour to learn more about your mother and the wonderful quilt that never would have existed without her efforts.

I love this quilt and admire it at the library frequently. I’m so pleased to read the story behind it. Great article.

Thank you so much for your comment, Laura! I love the quilt, too.