The Merril Collection sprang to life in 1970 when Judith Merril, a writer and activist, donated all of her science fiction books and magazines to the Toronto Public Library. Formerly called the Spaced Out Library (1970-1991), the Merril Collection now holds more than 73,000 items and “is the foremost North American public assemblage of Speculative, SF and Fantasy Fiction” (Sol Rising, January 2011, p. 16). 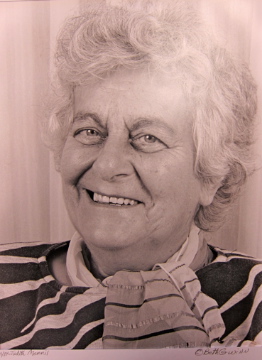 After I climbed the stairs to the third floor of Lillian H. Smith Library to visit the Merril Collection, I admired the way the shape of the room hugged the curve of the library’s central atrium.

A few minutes later, I was warmly greeted by Lorna Toolis, Head of the Collection. I’m very grateful to Ms. Toolis, who took me under her knowledgeable wing as she walked me through row upon row of reference stacks that are home to an astonishing diversity of materials. 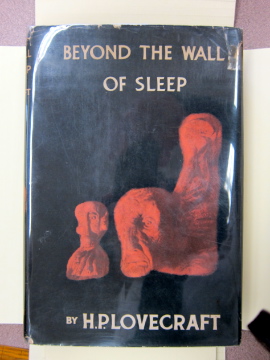 To accommodate such a robust archive, the library installed compact shelves which can be manually moved closer together so that aisles between rows of shelving disappear at will. At one point during my visit, another librarian called out a warning that she was about to turn one of the silver wheels to move a shelving unit. (Providentially, no Collection Heads or library bloggers were squashed in this potential Temple of Biblio-Doom).

Standing clear of the moving shelves, Lorna revealed the open secrets of an amazing collection. Her enthusiasm was contagious as she explained that she’d loved science fiction ever since grade 3, when she discovered a stack of books in her grandmother’s attic. A personal collector of science fiction since age fourteen, Lorna’s justifiable pride in the Merril’s scholarly legacy was tangible.

I felt privileged to tour this special place. Along the way, I saw critical works on Batman and Buffy the Vampire Slayer, graphic novels, fanzines, anthologies, comic collections, rare magazines, games, artwork in map drawers, and material about UFO’s. There was even a shelf devoted to alien linguistics, a phrase I’d never heard before. 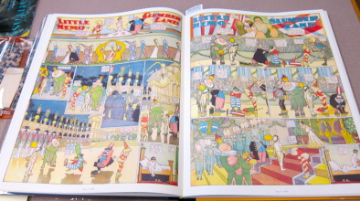 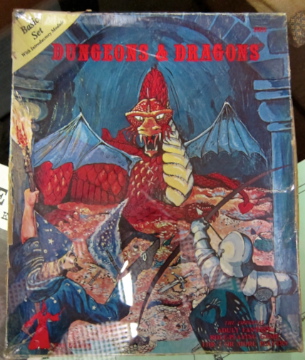 One aspect of what made visiting the Merril stacks so special was the presence of so many fragile materials that might have disintegrated long ago if it weren’t for the constant temperature of 21 degrees and protective book covers that have prolonged their shelf-life. Lorna explained that most early science fiction books and magazines were printed on cheap paper and designed to be enjoyed and discarded. 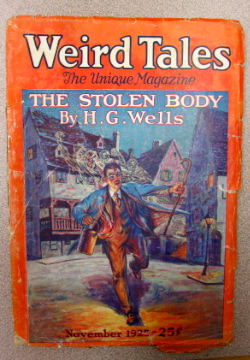 Part of the ephemeral world of popular culture in the first half of the 20th century, science fiction publishing wasn’t about leather-bound volumes, gilt pages, and other establishment frills. It didn’t put on literary airs or flounce about the canon with its semi-colons in the air. Instead, science fiction offered sensational art (in both senses of sensational) on the covers and wild times with robots, stolen bodies, flying saucers with eyeballs on the chassis, and an early feminist heroine, the Golden Amazon. 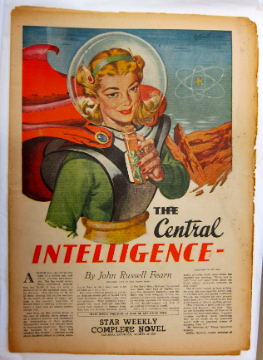 The Central Intelligence by John Russell Fearn (starring the Golden Amazon character) in The Star Complete Novel for Saturday, August 22, 1953

With so much difficult-to-find material, this unique collection is a magnet for international scholars as well as more local researchers, including writers like Margaret Atwood, professors, artists, illustrators, and students from high school or colleges such as OCAD. Lorna told me that there are patrons who come in to the facility just to read a rare copy of a book that would otherwise fall apart if it were in general circulation. 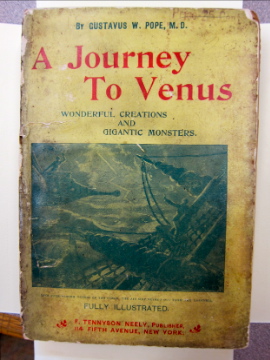 Near the end of the stacks tour, Lorna led me to a cart loaded with treasures protected by white book folders that fastened with circles of velcro. She carefully unwrapped more than a dozen of them and then ferried these selected materials to the public reading area so I could take photographs of them.

I was interested in everything Lorna showed me, but the artwork on the magazines made the biggest impression, especially this rare Amazing Stories edition (Volume 1, #1, April 1926). 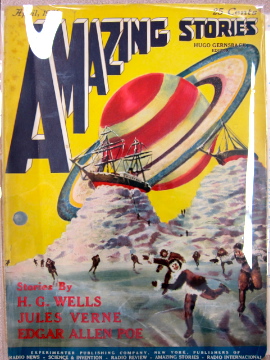 The covers of these editions of The Shadow also blew me away. When Lorna asked me which ones I wanted to photograph, I felt compelled to reply, “All of them!” 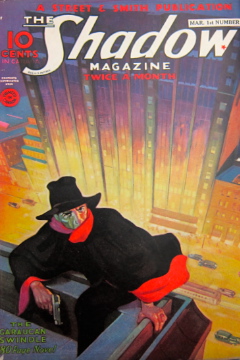 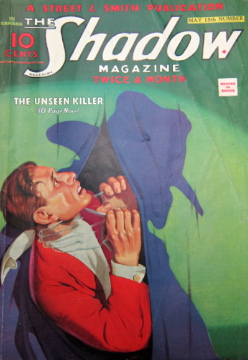 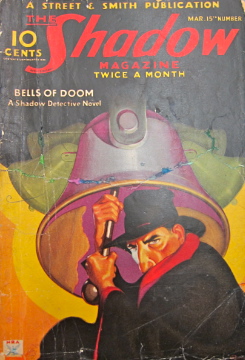 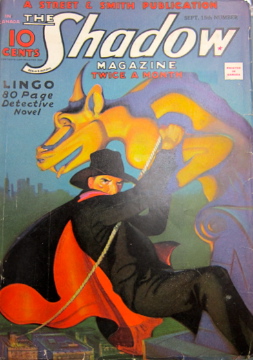 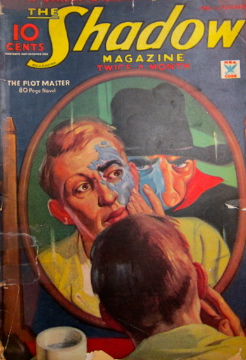 As I was introduced to titles like Flying Saucer Rock and Roll and Dictatorship of the Dove, I gained a new appreciation for the unbridled creativity displayed by the genres of the Merril Collection. 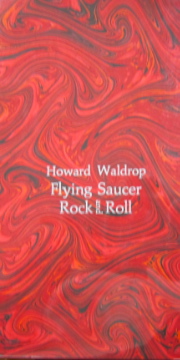 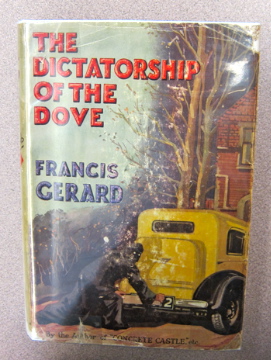 In addition, I loved how the Merril’s 19th century material enriched my understanding of literary history. For example, May Agnes Fleming’s The Baronet’s Bride “is retained as an example of early gothic melodrama, without fantasy elements, to assist researchers in the development of gothic fiction. . . . It was serialized in Saturday Night, beginning on 3 October 1868 and ran for thirteen weeks before being published in book form as The Baronet’s Bride or A Woman’s Vengeance” (e-mail from Lorna Toolis, 11/17/11). 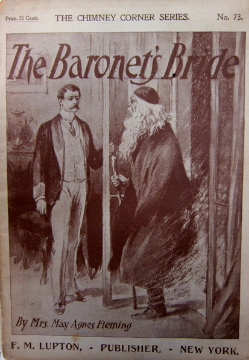 Vampire researchers also have plenty of material in the Merril Collection to animate them, including the first serialized vampire story in North America (1875) and a first edition of Dracula (1897) in its plasma-curdling yellow cover. 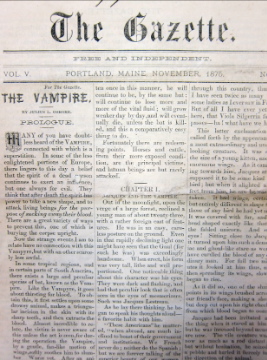 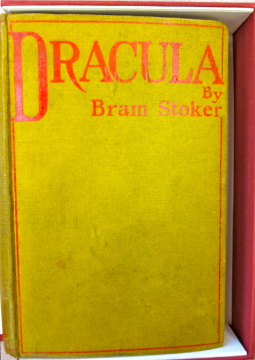 Moving on to 20th century materials, I was charmed by this Armed Services edition copy of H. P. Lovecraft’s The Dunwich Horror, specially designed to fit in a soldier’s knapsack and provide mental escape from the real-life horrors unfolding around him. 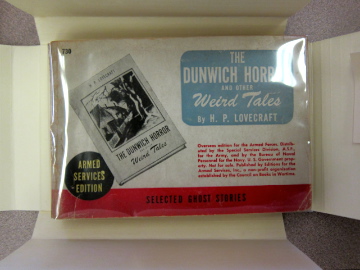 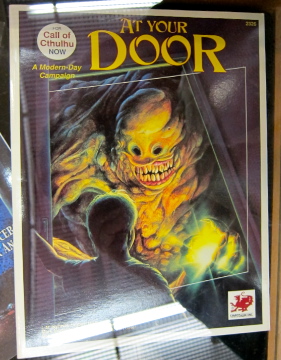 Finally, bringing images of horror, speculation, and fantasy to our doors in the 21st century, reading materials such as Sci Fi and Realms of Fantasy (among many others) are available in the reading area. 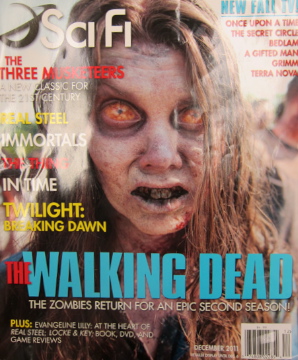 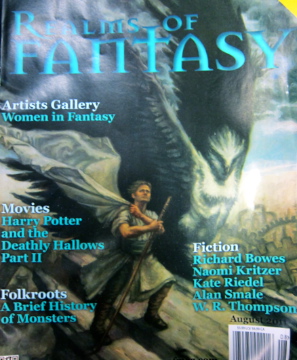 Near the end of my tour, I signed the most imaginative guest book I’ve ever seen, which was hand-crafted by Toronto artist Robert Wu and donated by The Friends of the Merril Collection. 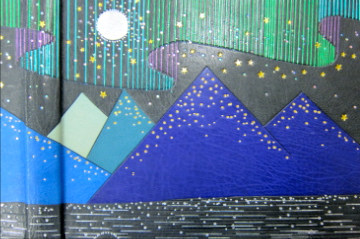 For me, Wu’s art represents the lunar mystery of imagination, something which the Merril Collection celebrates and preserves. Previously, I had not been partial to most science fiction, speculation and fantasy, but this persuasive collection changed my mind!

Thank you so much, Stella! I’m so glad you enjoyed the pictures and comments!

Hello,
I came across two great old paper novels of John Russell Fearn published on August 22 1953 The Center Inteligence and the one pub;lished on July 10 1954 The conquere.
I was wondering if you interested to buy for your collection and if so what is your offer
Thanks
Eric Godaj

The collection belongs to the Toronto Public Library, so you might want to inquire at this number: 416-393-7748. Best of luck!