I first visited Sanderson Library seven years ago after spending a few hours at Urban Affairs (the hapless branch that closed in 2011). I then walked from Sanderson to College/Shaw, bringing the day’s total library visits to three. In 2012 and 2015, I returned to take pictures of Sanderson.

Nestled in a busy community centre complex with a pool, outreach facilities, immigrant services, and a greenhouse, this branch felt much more alive than Urban Affairs. At Sanderson, a jug of water in the lobby, the sound of a fussy baby crying, and the presence of a puppet theatre all contributed to a tableau of warm community engagement.

As I wandered through the adult section â€” extensive with split-level floor, stairs, and a ramp â€” I admired the large Vietnamese, Chinese, Portuguese, and Spanish collections. Canadian Literature had an impressive showing, as did the ESL and Literacy section. 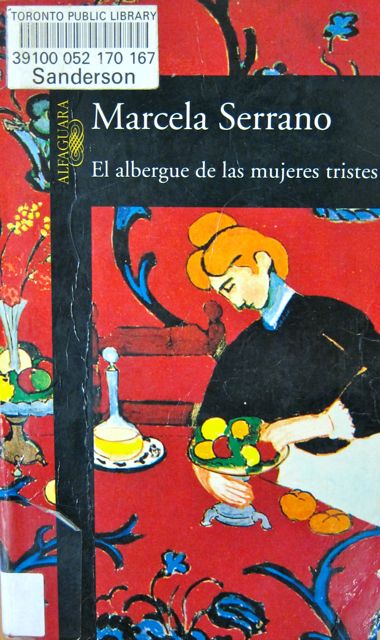 My favourite Sanderson feature was its provision of eight window-box seats upholstered with grey carpet. The one I chose to inhabit had a view of the community garden; from my window I saw tall weeds, a greenhouse decorated with childrenâ€™s drawings, and white butterflies. The seat captured a glorious patch of sunlight, and I luxuriated there in my stockinged feet for over twenty minutes. Easily made happy, reading in window seats is one of my top ten blissful activities.

The scene outside Sanderson Library near the corner of Dundas West and Bathurst was less than blissful, however. Two tired homeless men were sleeping away the steamy afternoon under a tree in the courtyard beside a wide expanse of library windows. Just over their heads was a sign yelling â€œREADâ€ in big red blobby letters. Separating the two sleepers was an abstract concrete shape, part bench, part sculpture. And on the sidewalk nearby were some murals of mythical creatures painted by an artist called Victor.

In city with many creative strengths as well as challenges, I’m grateful for libraries like Sanderson that provide a place for all Torontonians to dream in the sun with a book for a spell.