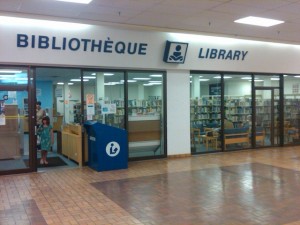 On a recent weekend visit to Elliot Lake, a local friend indulged me in a visit to Elliot Lake Library when we could have gone directly to the lake. She took me inside the town’s quiet 1980’s mall, where we found a wonderful Bibliothèque. It was much larger than the Toronto mall libraries I’ve visited, such as Woodside Square, Eglinton Square, Maryvale, Steeles, Bridlewood, Black Creek, and Bayview. 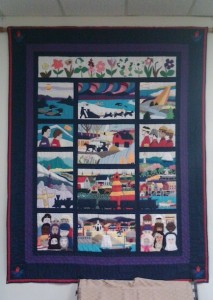 With large glass windows facing a wide mall corridor, this library contained spacious east and west wings. The entrance was on the west side, which housed non-fiction, reference, and a collection of computers. A quilt tapestry showed off Canadian-themed appliqués, and across the room was a giant dream catcher and a display of fishing rods, tackle, and thick booklets in English and French about fishing regulations. Another large section was devoted to Mining Environmental Assessment Reports. 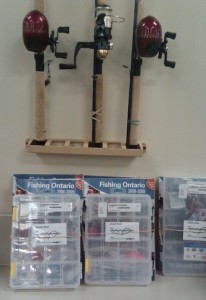 Crossing over to the east wing, I discovered an entire wall devoted to livres en français. My initial surprise at this made me realize that I had mistakenly associated small towns with monolingualism. To my knowledge, the only Toronto Public Library branch with a comparable French collection would be North York Central.

Opposite the French section was a fairy-tale mural painted by L. Finn in 1992. Springing from the pages of a children’s book were a host of classic characters: Ali Baba, Alice in Wonderland, Puss-n-Boots (who was struggling to remove his famous footwear), Little Red Riding Hood, and Babe the Blue Ox.

Not far from the lively mural, a family reading area featured a plastic globe with a talking airplane, two rocking chairs (one large and one small with painted jungle animals), and small mats with triangular wedges for upper-body support.

Before exiting Elliot Lake Library, I bought four National Geographic magazines for a dollar. Although it felt odd to leave a library without checking out any books, lack of borrowing privileges could not diminish the happiness of visiting my most northerly branch to date!

One reply on “Elliot Lake Library: An Ontario Treasure in Algo Centre Mall”

I loved the idea of a Library in the mall! So easy to access! Wondered why this was not more prevalent. With the loss of our Mall, there was a loss of treasures in the Library…historical papers, all those books..some can be replaced, but many will not be. There was some special art there, donated by supporters of OUR Library and art lovers. All this was trashed, without the ability to rescue the irreplaceable items….politics and insurance? We have managed to survive nicely in a temporary space, and eventually will be relocated to our new Plaza, under construction, with a safer environment and no leaky roof! It is so nice to read these comments, as much about the mall collapse has been negative. We did have it good at one time! Thanks for sharing this!