Due to a series of transit mishaps, I arrived late for this Black History Month event at Weston Library. When I came into the program room, three adults and five children were watching an animated film called Mind Me Good Now! (2005) in attentive silence. I was soon absorbed in the story, which is based on a book by Caribbean writer Lynette Comissiong.

Even though Dalby and Tina’s mother warn them never to cross a certain footbridge that leads to a jungle path, Dalby disobeys and his older sister follows him. At the end of the path, he discovers an isolated hill with a tree on top that is also a house. Before Tina can stop him, he’s standing at the door of an evil tree-house.

A tall stranger in a long purple gown beckons the children inside, promising them food. She tells them she is Mama Zee yet neglects to inform them that she is actually a cacoya (witch). However, her home decor provides some clues to her true profession: large bones serve as curtain rods and a skull rests on a shelf. Magic vines have tangled themselves around the door handles to prevent escape, and Tina soon realizes that she and her little brother are in the wicked clutches of a cacoya.

Mama Zee serves them bowls of green soup, and Dalby becomes sleepier and sleepier. Mama Zee begins a terrifying chant about the best way to cook little boys, but Tina interrupts her with a request, knowing that cacoyas are required to do anything a little girl asks. She says, “At home, me mommy always shells peas before I go to bed.” So Mama Zee obliges and shells a bowl of peas, assuming she can resume her evil cooking preparations after the task is done..

When the witch starts to reach for the sleeping Dalby, Tina quickly shakes her hair out of its braids and says that her mom always plaits her hair before bed. Mama Zee is more grudging this time, but she complies with the plaiting request. Then she turns her attention once more to Dalby, only to have Tina employ another delay tactic. She sends the cacoya out to fetch water with a non-watertight bucket. Mama Zee departs with obvious ill-grace and has a very frustrating time trying to collect water. When it spills all over her gown, she has a tantrum.

Mama Zee realizes she has bigger problems than a faulty bucket when she sees that it’s almost dawn. Too late. The sun comes out and she dissolves into a mere puff of ashes. The vine-locks on the door also disintegrate and Tina and Dalby are free. The film ends as they are reunited with their worried mother, who has come to fetch them.

After Mind Me Good Now! ended, gifted storyteller and Children’s Services Specialist Laurel Taylor-Adams read from La Diablesse and the Baby by Richardo Keens-Douglas. In this story, a wise grandmother foils a diabolical visitor’s baby-stealing plans on a stormy night.

The glamorous stranger is dressed in a long blue gown which covers her feet. After gaining entrance to the grandmother’s house by appealing to her sympathy, the diablesse asks her reluctant hostess three times to hold the crying baby, but the child’s grandmother politely refuses. The stranger eventually goes away but leaves some evidence of her visit. In front of the house, the morning light reveals one muddy red human footprint and one muddy red hoof print! 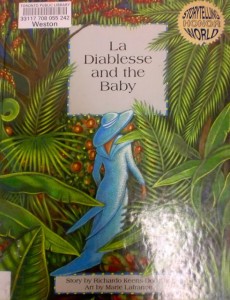 Before she started reading, Ms. Taylor-Adams graciously invited me to move forward so I could see the pictures. From the front row, I was better able to admire her dramatic storytelling style. I liked how she made whooshing sounds to imitate the wind and the rain, and she also sang the lullaby that the grandmother sang for her grandson. These details took us deeper into the world of the story. Later, Ms. Taylor-Adams told me that she’d been a children’s librarian for 30 years, experience which shone in the masterful ease with which she simultaneously read the text, showed the pictures, and made eye contact with the audience.

The last story of the evening was a personal one about the facilitator’s great uncle Bob. His boat, The Spanish Rose, mysteriously disappeared in a fog bank for two weeks in the Bermuda Triangle. The biggest mystery of all was that the six boatmen thought they’d only been in the fog bank for one day!

Even though I missed the first half of the program, I thoroughly enjoyed “Duppies, Jumbies, and Old Time Tales.” Don’t let Black History Month dissolve like Mama Zee before you take advantage of the many programs on offer at the Toronto Public Library!