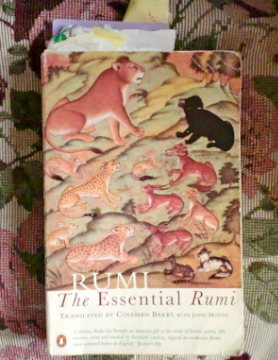 I first learned about Rumi’s 13th century sufi poetry in 2002, not long after I had immigrated to Canada. I was listening to a CBC Radio program and became transfixed by a beautiful voice reading Rumi’s verses. Soon afterwards, I bought the book pictured above and began filling it with bookmarks to facilitate access to my favourite lines, which later inspired various collages I made between 2007 and 2008: 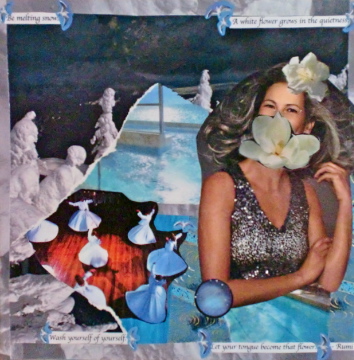 Wash yourself of yourself

A white flower grows in the quietness

Let your tongue be that flower. 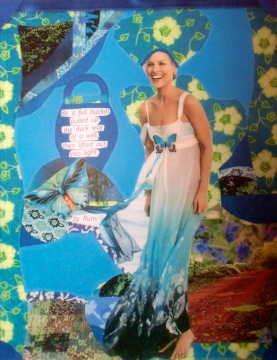 Be a full bucket

Pulled up the dark way of a well

Then lifted out into light. 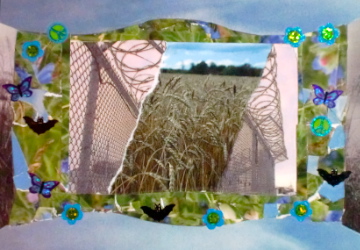 Why stay in prison

When the door is so wide open? 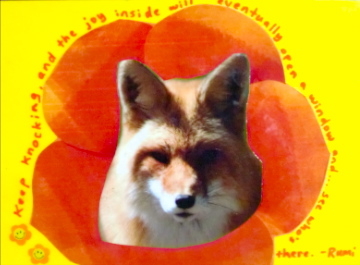 and the joy inside

will eventually open a window and . . .

When I saw the recent announcement that Don Mills branch was hosting a program about Rumi, it was another knock on the door, to which I answered, “Yes! I would love to go!”

On Wednesday evening, I drove through the rain to the library. At five minutes before seven, the downstairs auditorium contained about twenty people, a number which rose to nearly fifty by the time the program ended at 8:15.

Our speaker was Tina Petrova, a remarkable woman who survived a 6,000 foot plunge in a jeep thirteen years ago. The spiritual crisis that she suffered as a result of feeling imprisoned in a broken body led her to consider suicide. On the most desolate night of her soul, she had a dream in which Rumi’s poetry spoke to her. The dream gave her hope and a newly inspired purpose: create a gathering in Toronto to celebrate Rumi in song, dance, and the spoken word.

The Rumi celebration from Petrova’s dream came to pass, and her continued immersion in the community of Rumi scholars and enthusiasts led to the making of a documentary film called Rumi: Turning Ecstatic, which we had the privilege to see on Wednesday night. In Petrova’s words, “the film made me” and the process took seven years. Her cinematic labour of love premiered in 2006 on Vision TV and has been screened in 15 countries, translated into three languages, and honoured by the United Nations and the World Bank. 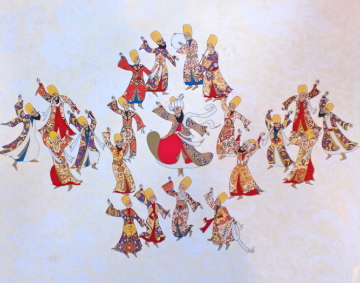 Back cover of Rumi: Whirling Dervish (Written and illustrated by Demi)

Watching Rumi: Turning Ecstatic was a profound experience, all the more so because the film’s creator had just shared her story with us. We were mostly silent as we absorbed the narrative which combined Petrova’s spiritual autobiography, Rumi’s biography, scholarly commentary, and the sheer joy of dervishes in full twirl. My favourite part of the film was when Kabir Helminski quoted these verses: “Not only the thirsty seek the water — the water seeks the thirsty.” Two gentlemen in front of me literally gasped at the impact of these words.

All too soon, an automated voice announced that the library was closing in fifteen minutes. I picked up a couple of Rumi books from the display table near the door and checked them out in a reverie. As I travelled home in the heavy rain, I continued to marvel over the relevant depth and breadth of a mystic poet who left this world seven hundred years ago. 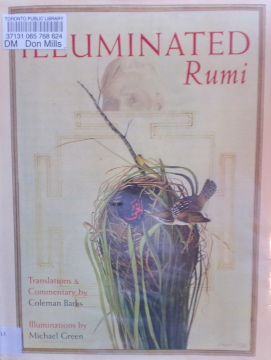 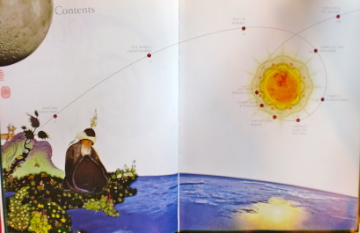 Wonderfully Non-linear Table of Contents from The Illuminated Rumi. 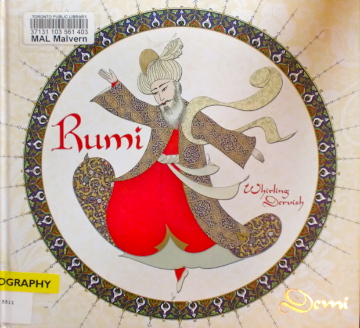 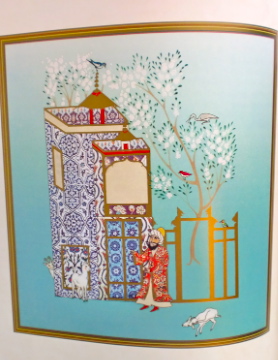 One of Demi’s Illustrations (page 24 of Rumi: Whirling Dervish)

2 replies on “Rumi Shines in Collage and at Don Mills Library (and Indeed Everywhere!)”

I had the great privilege of doing my yoga training with a woman who is a devotee of Rumi and sings his poetry in the original Persian. One day, during an intensive workshop held in the hallowed halls of U of T, this woman broke into song, dedicating the piece to our revered teacher who was in from India. Rumi filled every inch of space. Rumi filled the air. Rumi filled our lungs, and I couldn’t breathe. I couldn’t move. All I knew is that God was coming out of that woman’s mouth in the form of Rumi and I was humbled.

Tabitha, I LOVE that story! I think it might be calling out to be a post on your blog.