My grandmother Mary Raine (1911-2008), a practical woman from a small Missouri town, would have classed the practice of guided visualization as “a little different.” Nevertheless, Grandma was present in the meditation room of an Ontario spa last spring when a mindfulness coach asked me to close my eyes and descend deep into the earth, deep within deep, down to the cave of the grandmothers.

Drawn by the firelight and the chance to see Grandma Raine again, I went into the cave. Grandma gave me a heavy object wrapped in a gray cloth. Resting inside the cloth was a stained glass ornament that once dangled from a curtain rod above her apartment’s east window. When it caught the bright Missouri sunlight, it released streams of green, lavender, red, and blue. I used to love looking at those ribbons of light, and when my niece Emma saw them as a baby, she loved them too.

I took the gift reverently and gave thanks for its rainbow message, the loving command to let myself shine. It called for translucence and generation, allowing light to both pass through me and radiate from within. It called from a cave as deep as the grandmother’s mythical one, but just as real and powerful.

The gift was a verb. Shine. Be the stained glass. Transform clear light into personal pigment. Manifest the light into words, art, kindnesses, movement, and love. Don’t be opaque. Be clearly colorful, openly bright, unabashedly shiny, embody the light. 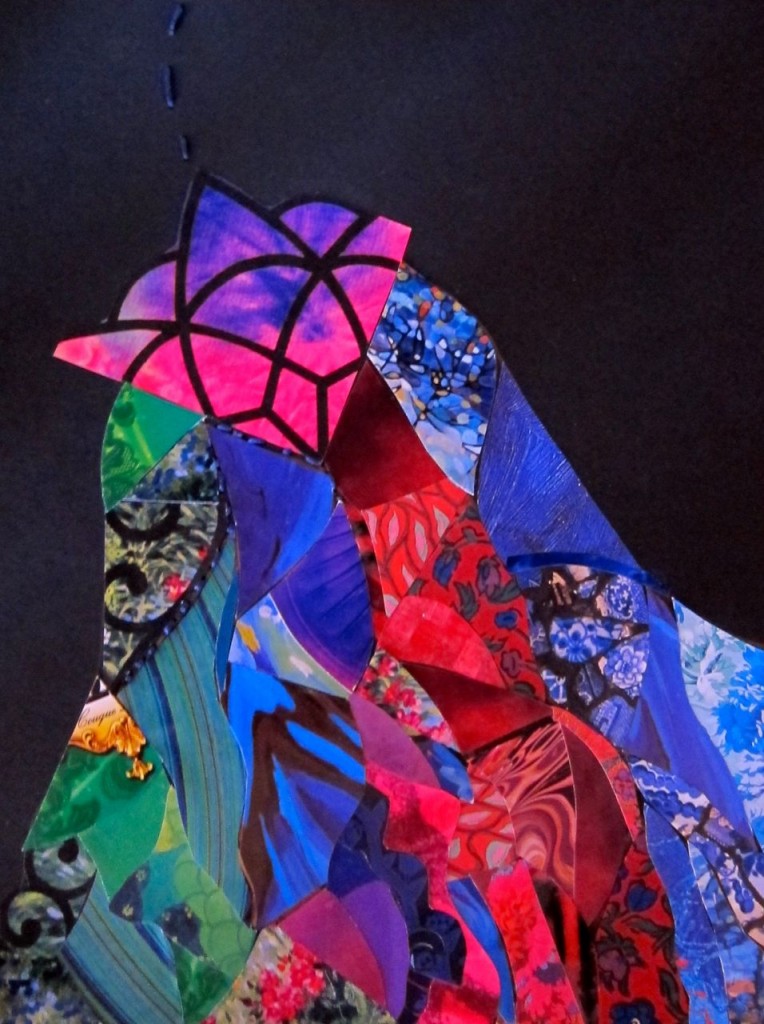 The visionary gift and its invocation have arrived at the perfect time to fight grief shadows that shroud, inhibit, and dim. Grandmother Raine’s heirloom bathes mind, body, and soul in its light and invites the living to surrender to radiance. It bids us to shine, shine, shine, and shine.

Shine on, dear Catherine! Your playfulness and being inspire me.

This is beautiful, Catherine — the writing and especially the vibrant colours of the collage really shine — as you do! Thank you for sharing this.

Thank you for your shine!

Thank you for this beautiful reminded to let my light shine. 🙂

I was so hoping that the piece would remind any readers to shine! Thank you, Gina!

Dear catherine,
To me,it was one of thebest I have seen from u.it seemed spontaneous and flowing.it was lively,humble,yet colorful and dynamic.I lovedit.thanks for sharing it.you made my day.I think we should get together and do collages .Ireally enjoyed thatday in the library.
One last thing,to me ,you are so boundless and carefree inside,but still u trim that stained glass to let the beauty come out.I mean that,s what I feel when I lookat this collage.
So muchlove,and I am so happy that I have known u

Thank you for the exclamations, Jonathon!!

I loved your thoughtful and generous comments! Thank you SO much! Yes, let’s have a collage fest soon. love, Catherine

I loved the line “transform clear light into personal pigment.” A wonderful message that you have the transforming power deep inside of you, of all of us, to shine, to let the light out. I will not be opaque! We will not be opaque!
Thank you dear friend for sharing your journey.

The collage is so beautiful. It is a perfect stained glass reflection. Such joy!
love, heather

Dear Heather, I was so moved by your comment! I was so hoping that the collage and message would encourage us all to shine! love, skippy

*sigh* I so needed this today. I needed the colours, the voice of the grandmothers, and the reminder that I too must shine. I must give myself that permission. It’s not enough that I encourage others to do so, I must live it myself.

Thank you for your deep, wonderful sharing. Shine on, dear friend! Shine on!

Tabitha, I am thrilled that you found encouragement in the shine piece and that it was a reminder for you to shine. The grandmothers really want you to shine! You have SO much to offer! love, Catherine

Your comment made my day! It really means a lot to me because I’ve always looked up to your artistic talent and because you’re my awesome cousin!

This is very poetic both visually and verbally, reminds me of a dream I had after starting music school: a royal blue paisley swirling kaleidoscope sky, the line from Haydn’s Creation echoing through my musical memory, the heavens are telling the glory of God. A peaceful cello chant reverberated as the master musician drew the bow across my strings.

Wow! I love your dream-vision! Thank you so much for your beautiful comment.