I finished reading Maggie Helwig’s Girls Fall Down almost a week ago, and I still find myself thinking about it. Girls Fall Down is a frighteningly plausible story about contagious fear and urban breakdown, but it’s also a beautifully complicated love story about two isolated souls, Alex and Susie-Paul, connecting and re-connecting with each other. 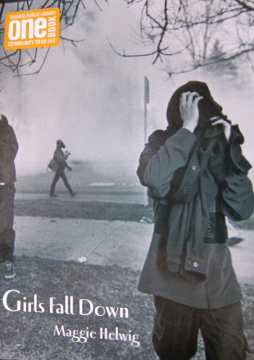 Helwig’s omniscient yet empathic vision of Toronto really impressed me, the way she brought to life an impersonal municipal geography by close observation of hundreds of personal details. Here’s an example: “The boy with the box of evil sat in the cafeteria of his high school, the box on the table beside him, eating a hamburger and feeling unusually cheerful. He . . . didn’t know that a security guard had phoned in an alert while he was on the (subway) train, though it would have made him happy to know this” (p. 26).

For me, the most moving part of the book was when Susie-Paul finds her twin brother Derek living in a tent under a massive bridge. Derek has schizophrenia, has stopped taking his medication, and is starving. However, these facts do not convey the whole truth about Derek, so Helwig directs our attention to the man’s “raw courage . . . . His hard-won choice to continue living, when so many possibilities to stop are offered at every hand, the cars on the highway, the trains on the tracks, an end to the daily loss. None of this represents Derek’s soul, scraped bloody, howling, fighting always to hang on, a solitary superhuman ordeal, unacknowledged by the world, unrewarded” (pp. 149-150).

When I see Derek through the author’s compassionate lens, I become a witness to his courage and his suffering. For this reason alone, I highly recommend Girls Fall Down. The book is also an engrossing read, all the more pleasurable for readers familiar with Toronto’s streets, and the Zephyr Antique Laid paper makes turning the pages a tactile as well as visual delight.

Thank you for picking a winner, Toronto Public Library!