Before I took Drawing 1 at the Toronto School of Art in 2012, I thought I was hopeless at drawing. Even though I had been making collage and textile art for six years, I didn’t feel entitled to call myself a “real” artist because I lacked basic drawing skills.

With very little formal training in art, I wanted to address the gaps in my knowledge that held me back from stretching into three dimensions. It was also time to overcome the limiting “I can’t draw!” belief.

On the first day of my TSA evening class, our instructor, Paul Turner, boldly asserted that anyone who could hold a pencil could learn how to draw. I thought to myself, “I hope I don’t prove him wrong!”

As an adult educator myself, I know how important it is convince students to move beyond negative assessments of their abilities. Comparing my skills from the first week to the final week of drawing instruction, I can happily report that the only thing I proved wrong was my self-doubt.

To thank Paul and encourage anyone who wants to learn a new skill, I offer this illustrated blog post as evidence that if I could learn to draw at the age of 43, then others most certainly can too!

In fact, I was actively alarmed when Paul stacked six books on top of each other and suddenly shifted all of their spines into different angles. How could I possibly draw that pile? I was barely adept at boxes floating in space, and my ellipses looked like squashed peaches in the mud.

Imagine my discomfiture when a variety of boxes on tables greeted us in week three. I had a drawing board, paper, and a skewer in my hand to gage proportions but little clue how to use it. (There was a reason why I scored low on spatial-relation skills on standardized tests in junior high). 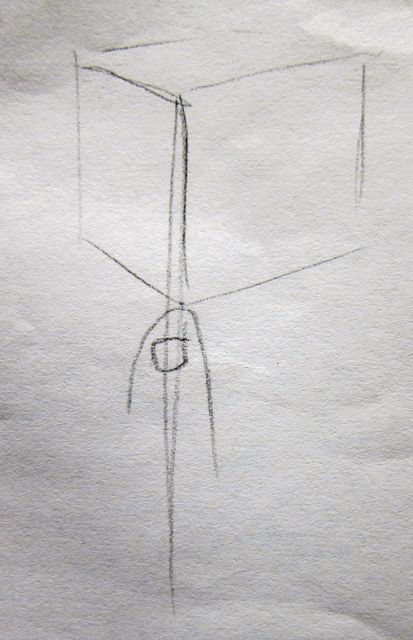 Paul had demonstrated the skewer technique, and he even drew me a picture of a thumb holding a skewer next to a box, but I still felt hopelessly out of my depth. To my horror, I was actually close to tears!

Though measuring proportions was difficult, our instructor exhorted us not to give up. A quick comparison of the drawings above and below bears testimony to the fact that this skill became much easier for me.

In week four, I loved the opportunity to “respond to the total form with one line” and build a “relationship of trust with (my) eye, hand, and mind” (Paul Turner). The total form was a male model who changed poses frequently, and the rapid shifts pushed us to draw from “head to toe, boom, one line!”

The looseness and freedom of this gesture exercise lifted my spirits after the previous week’s disappointment with myself. Many of my sketches seem to express this joy.

In week five, we considered “how objects behave in space.” I liked the challenge of truly looking at a lantern, a bottle of dish detergent, and a lampshade to determine proportion, shape, and line. I also greatly appreciated Paul’s advice to be in the moment while engaged in drawing: “Don’t focus on where you think you should be (skill-wise) or what your drawing should look like. Be here now!” 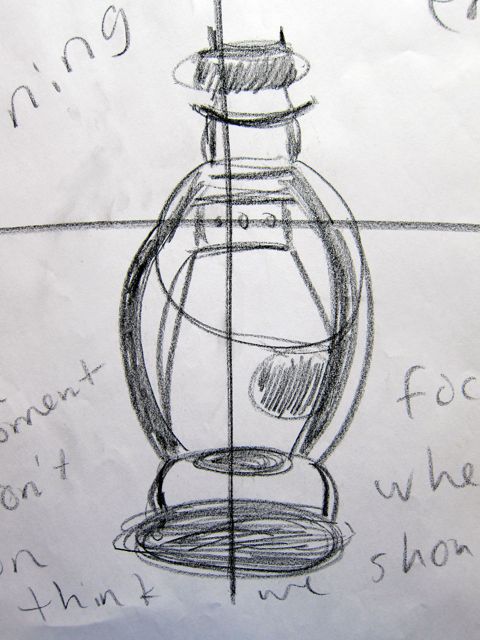 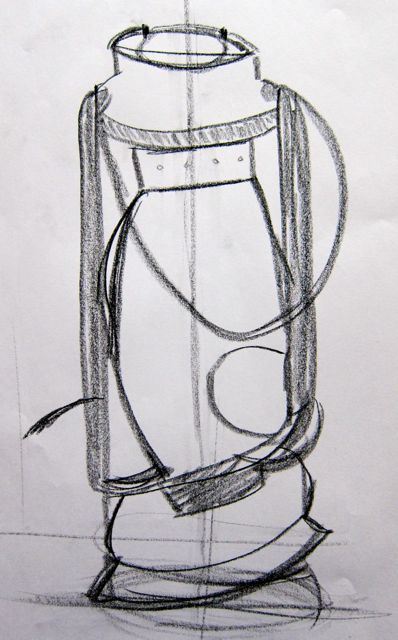 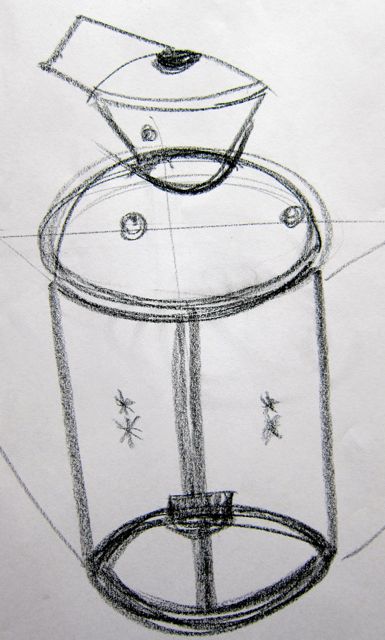 The following week, I learned to pay more attention to the spaces between objects. Our task was to “go after” the shapes created in the gaps between items such as a chair, a goblet, or a sled propped up together on a table. We used white charcoal on colored paper to depict the negative space, allowing the objects to take form from the absence of charcoal.

It was the objects’ turn to live in the gaps and let so-called empty space take center stage for a change. Why should positive, filled-up space get all the attention when so many fascinating patterns are waiting to be noticed in the liminal places, the edges of objects, and the sea of animated air between them? I loved the radical shift in visual and conceptual perspective that the lesson in negative space inspired. 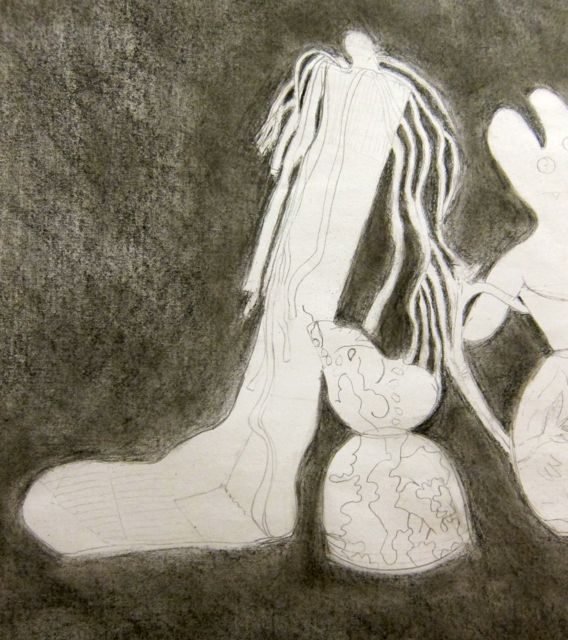 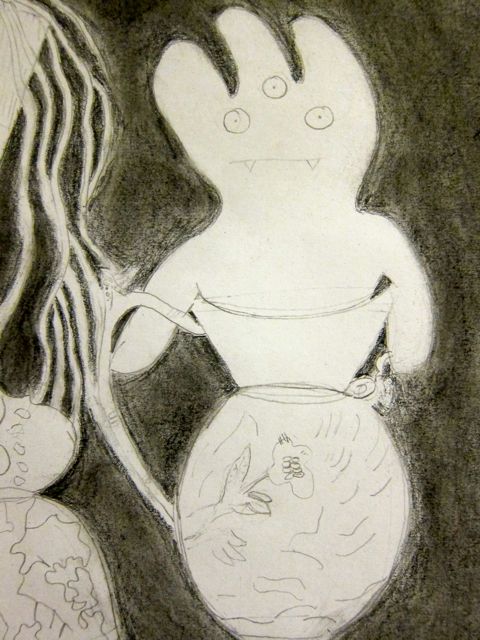 During week seven’s still-life exercise with two objects, I became very aware of the lovely negative-space shape made by the inside of my grandmother’s silver teapot’s handle, something I might not have noticed prior to the class. As I gazed at the teapot and a green vase from TSA’s closet of diverse objects, Paul suggested, “Let the shape lead you to the line.”

On the eighth class, we had a new model, and Paul instructed us to “build a height and width for the form and then plant a shoulder.” I liked the use of the verb “to plant” in a drawing context because it implied bold, purposeful action, a deliberate sowing of a seed from a burlap bag, a strong line from which something new can grow. 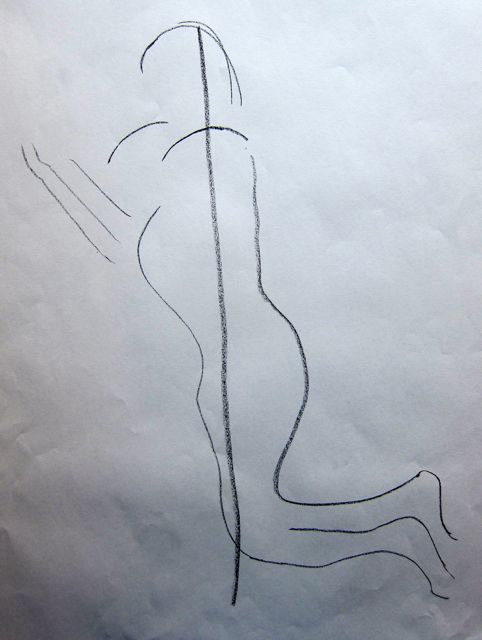 Planting the first shoulder of the form is an act of bravery, a commitment that changes a blank scroll of paper into a potential drawing. The first line transforms an idea into artistic reality, the abstract to the concrete, and fear-paralysis (“Will the line be perfect?”) into definitive action. 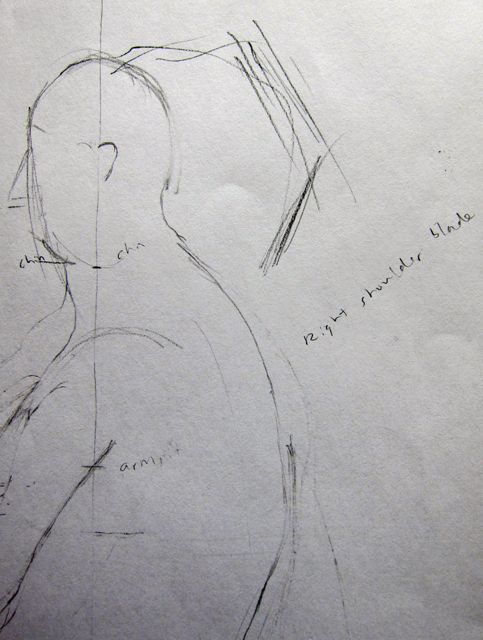 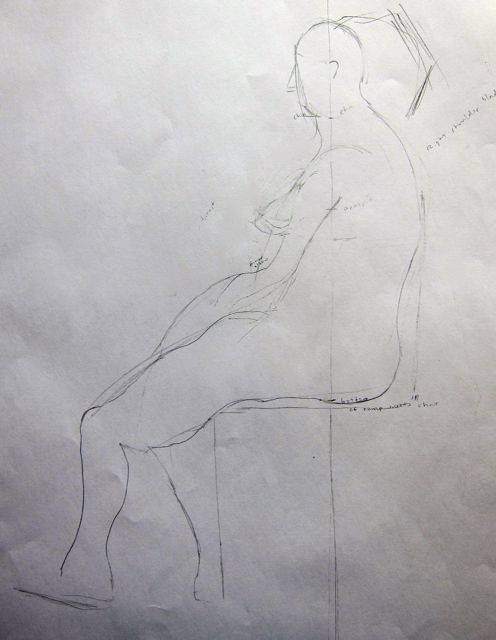 Value was week nine’s topic, and I struggled to get my head around the terminology and grapple with the sphere resting in front of me on a draped table. At one point, I sighed, “Vanquished by a styrofoam ball!”

I was disappointed in my value drawing even though I managed to improve it somewhat. However, I did like this artistic and psychologically-applicable advice from Paul: “Deal with the dark side of the form first and then work your way into the light.”

In week ten (our last week), we had the opportunity to do sustained drawings of another model and integrate what we’d learned about proportion, shape, gesture, negative space, and line. I also learned some new phrases to describe the long line of the body from shoulder to hip: “the line of action, the bow of the torso, and the C-curve.” I enjoyed thinking in terms of active lines. These lines are alive, humming with tension like an archery bow and curved like fruit in a bowl.

Even though I had trouble visualizing the planes of the body and understanding what Paul meant when he said, “Let the interior shapes guide you the exterior,” by the end of the evening I had two sketches I particularly liked. 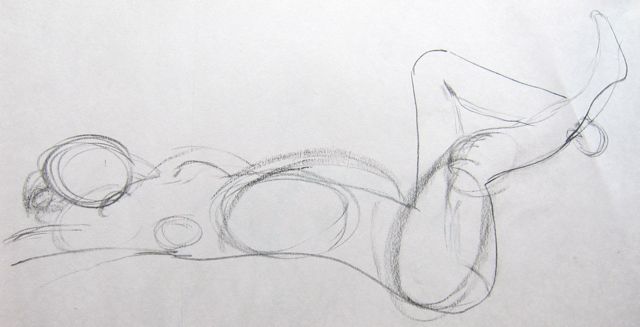 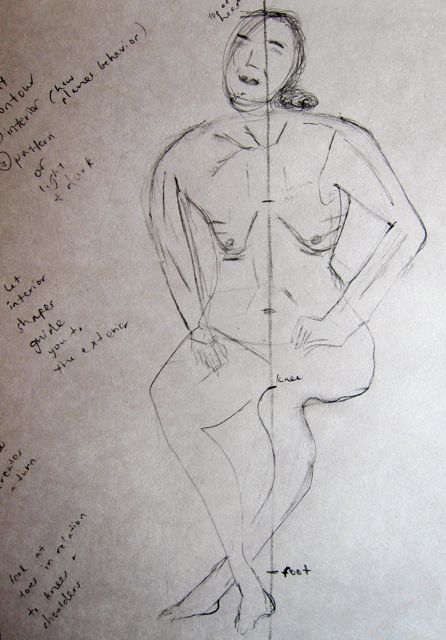 Reflecting on my experience as a novice student of drawing, I am very grateful for such a stimulating class that taught me to have faith in my learning potential. I especially appreciate the invitation to look at objects, space, form, and light in fresh ways. What a gift to an artist and a writer!

Thank you, Paul, for taking me on a journey from perceived hopelessness to confidence in a developing skill!

6 replies on “So You Think You’re Hopeless at Drawing?”

Catherine, you’ve really captured the loveliness of Paul’s classes and his teaching style. I took this class several times, and was able to continue building my skills gradually (if you repeated, he would often get you to do other exercises to keep you moving along with skill-building.) Very sad that TSA has shut down. A real loss. So many dedicated and supportive teachers who created a safe space in which adults could go back and resume their visual education, and re-connect with long-neglected parts of our brains and our psyches. Thanks for this wonderful blog!

Catherine – you’re post SO captures all that Paul gave us in the class. It’s a great tribute to his talents.

Thank you so much for your comment! I’m so happy that you felt the post did justice to Paul’s encouragement and inspiriation.

Thank you so much for your comment! I’m very sad about TSA’s disappearance, too.

Thanks for pointing me to this post, Catherine, in response to my question about your art. I loved the post, and your drawings, and seeing your progress. Paul sounds like a wonderful teacher. I laughed out loud when I saw the pink creature you brought to our dance in the still life. A one-eyed fuzzy white one has appeared in my dream world! Congratulations to you on becoming evermore the artist that you are! And thanks for sharing your process.

Brenda, thank you SO much for reading and responding to the art post. I’m glad the pink creature made you laugh in its different manifestations as still-life object and flying dance prop! Do you think you’ll make a drawing or collage of the one-eyed fuzzy critter? I’d love to see it.