Seven summers ago, I enjoyed a self-conducted walking tour of Urban Affairs, Sanderson, and College/Shaw libraries. In 2012 (and later in 2015), I returned to Biblioteca College Shaw to take some pictures.

The walls of this small branch made an immediate impression on me because they were the colour of key lime pie muted by Cool Whip. I also liked the way the green carpet combined white and green in a vine-leaf pattern. A potted tree accentuated the nature theme, and an aquarium, old sofa, and wicker chairs added to the cozy feel of the place. (Tree, aquarium, and wicker furniture were absent in 2012).

As I took in the entire room, it was inspiring to see how busy it was on a weekday afternoon. Every table had readers bent over their work, and each computer hosted an absorbed user in front of its screen. 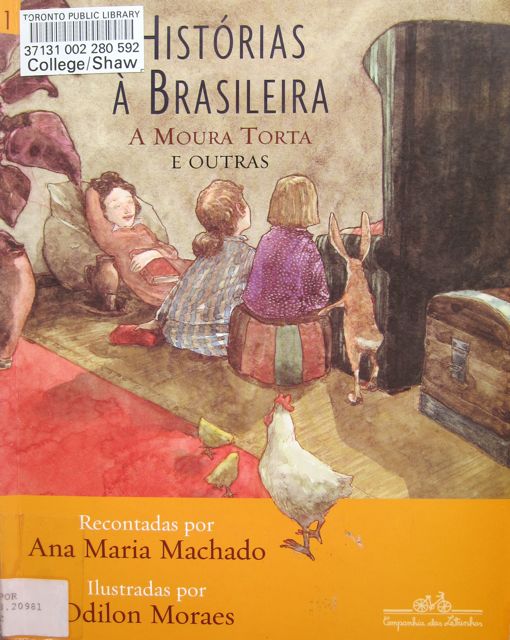 Next, I wandered over to the Chinese and Portuguese collections, both residing in a contemplative corner near a circular window overlooking Shaw Street.

In the southwest corner was the Childrenâ€™s section, which included a low window bench with a red leather cover. The window above the seat was plastered with a paper-plate craft display.

On the 2012 visit, fanciful stickers had replaced the paper plates. The dragon sticker was especially interesting. Why was the dragon licking a bicycle hitching post?

Unconcerned by the hungry dragon, two teddy bears surveyed the active reading scene from the top of a nearby shelf. They added to the domestic atmosphere of a branch that celebrates children’s art.

On my third visit in 2015, I noticed the functional beauty of the returns chute, appreciating its role as a transitional conduit between inside and outside, borrowed and returned, potentially over-due and safe.

After I finished taking pictures, I plunked myself down at the long computer table by the south windows and took in the animated view of College Street. With the encouraging word “Revival” in front of my eyes, I felt very fortunate indeed to rest among the trees, roses, and bicycles of Little Italy at College/Shaw Library.