On a research visit to Northern District Library in 2009, I was struck by the serious atmosphere of this branch, how its vast main floor reminded me of a university library. To wander among its extensive shelves took a pleasingly long time, and an hour had passed before I realized I’d better wrap up my notes and fetch some food for dinner.

Perhaps it was hunger talking, but the grid pattern of the white ceiling reminded me of an upside-down waffle. The flat lights were the waffle’s indentations and the beams which framed the light-grids were the raised ridges. As I walked under the pale waffle, I passed big leather couches near the entrance and headed over to the large Children’s Area in the southeast corner.

Reading benches were placed near the tall windows, creating handy places to perch when the call to read sounded. I liked the inclusive display of books propped on top of a shelf, titles which included Heroes and Shamans; Goddesses; Sikhism; and Many Ways: How Families Practice Their Beliefs and Religions.

I was also impressed by a large piece of functional art in the Children’s Area that was fashioned from wood. Appleapes had a red border that framed an apple tree and five apple-loving apes. The apple tree was on the left side and hosted a woodpecker on its trunk. A big mama ape occupied the majority of the composition, filling the lower middle and right portions. Clutching an apple in the digits of each lower limb, she also had a row of coat pegs and hooks integrated into her body. Above the mama primate were four babies hanging from the red wooden border overhead. They, too, had apples in their clutches.

As I meandered through the rest of the library, I marvelled at the size of the foreign language collections: French, Serbian, Chinese, and Estonian. There used to be a Japanese collection as well, but a notice advised that it had been moved to North York Library. ESL and Literacy materials abounded, and a North Toronto Local History Section was available too. 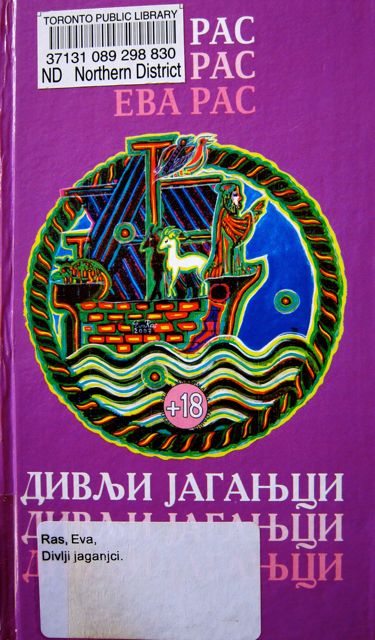 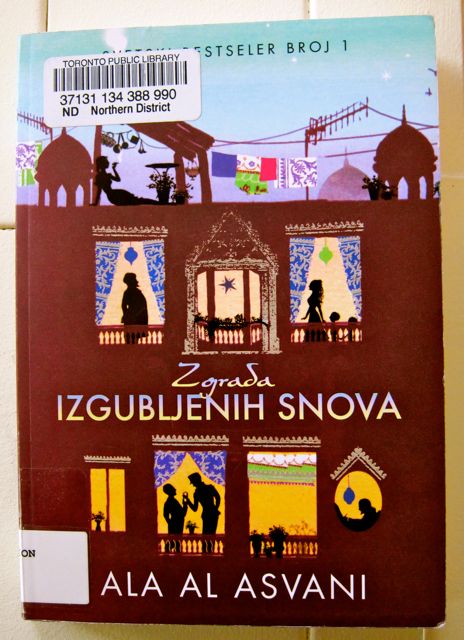 The Skylight Gallery upstairs consisted of a semi-circular stretch of wall that curved underneath (surprise!) a grand skylight. With the exception of one painting near the washrooms, no artwork happened to be on display when I visited in 2009. I had some difficulty making out the artist’s name painted in the bottom right corner, but it looked like Tom Lane. With a distinctively tactile appeal, the large canvas was covered in tinted tree bark, and its three-dimensionality was enhanced by protruding mushrooms. Refraining from touching the bark, I trotted back down the stairs and emerged into the afternoon busyness of Yonge and Eglinton.

In the two and a half years between my first and second blog post about Northern District, a renovation occurred and I added camera skills to my blogging toolkit. (Furthermore, after a recent visit to take pictures for an upcoming photography exhibit, I edited the 2012 photos and added new ones for good measure.)

In 2012, the main differences I noticed were a glass-walled program room (where my friend Ellen and I led a Culture Days program in 2011 ), luxurious new study booths in the teens section, a snacking zone, and three beautifully contemplative study rooms.

Two other important changes were the shifting of the children’s section into a different corner of the library (minus the Appleapes) and the creation of a spacious reading area in its place.

I liked the way the new reading room seemed to thrust the readers into the heart of Yonge and Eglinton — all the city dynamism without the noise!

The final difference between the 2009 and 2012 versions of the library was the presence of a striking art display by Afsaneh Shafai in the upstairs skylight gallery.

Northern District Library, it’s been a pleasure to witness your evolution. Keep bringing the scholarly energy, support for the arts, and willingness to change!