Now known as Pape/Danforth, Danforth Library joined the Toronto Public Library family in 1929, one year before Runnymede branch. Together, the price tag of the two libraries came to $100,000.

Pape/Danforth’s distinctive Tudor Revival look was an expression of Chief Librarian George Locke’s desire to re-create a British shop of olden times: “The front facade is decidedly English in character, the lower part being carried out in stone and the upper in half timber work and stucco panels, with projecting bays surmounted by gables” (cited in Margaret Penman’s A Century of Service: Toronto Public Library 1883-1983, page 28).

More than a year before the library officially opened, Dr. Locke spoke to the Toronto Telegram on the topic of new branches: “You cannot make grown people good but you can make them more interesting . . . We are trying to make them more interesting by building libraries” (1 February, 1928). Locke’s comment might suggest that he thought early 20th-century Torontonians were boring. Or perhaps he was simply tired of them complaining so much about the moral dangers posed by fiction in the libraries.

If Locke’s strategy was effective, the number of amusing conversations at Toronto’s cafés and parties should have risen in direct proportion to the growing number of libraries over the past 86 years. With 100 libraries at present, we have absolutely no excuse to be dull! 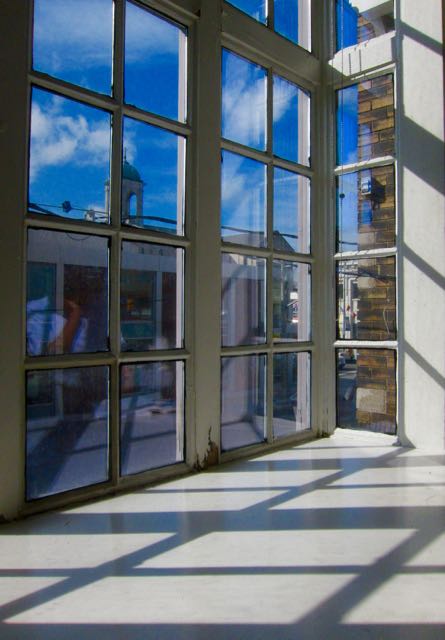 Although Pape/Danforth must look quite different on the inside than it did in Dr. Locke’s day, I think he would have approved of the rectangular swathes of space and sections of wooden flooring.

While long and narrow, the two floors of the building nevertheless avoided claustrophobic effects. For instance, the lemon yellow walls on the east side of the main floor made the Children’s section seem spacious and elegant.

Tucking a shelf of picture books under a long window seat also saved space, making room for an olive-green cushion shaped like an amoeba. I was also fond of two stuffed dragons who occupied a windowsill each, their green ears peeled for stories about Medieval times.

On the west side of the main floor was a square section of wide-planked flooring that was pleasant to tread upon. Standing on this wooden raft near the computers, I studied some artwork by Otilia Gruneatu Scriuba, who had filled a canvas with centaurs, fire, and athletic male forms. (More of his paintings were on display on the wall beside the landing between the lower and upper floors).

A few paces away from the computers was a reading lounge blessed with a bay window overlooking Pape Avenue. I appreciated the luxurious width and depth of the windowsill; it seemed to be a sill for its own sake, celebrating its intrinsic value instead of being pressed into service as a bench or shelf.

Opposite the bay window, a collection of objects in a built-in shadow box caught my eye. To promote Asian Heritage Month, an artistic hand had arranged bamboo stalks, a red shawl, a glossy necklace, and some books in the display box.

When I walked upstairs, I found another bay window directly above the one on the main level. Its sill was also very generous. In fact, it was so inviting that one reader was resting her feet on it. I worried that she was going to leave footprints on the historic white sill or transfer a brown ring from her travel mug.

Harnessing my disapproval, I shifted the focus to browsing innocent shelves that offered materials in Chinese, Greek, and French. The categories of ESL and Adult Literacy also made a strong showing. 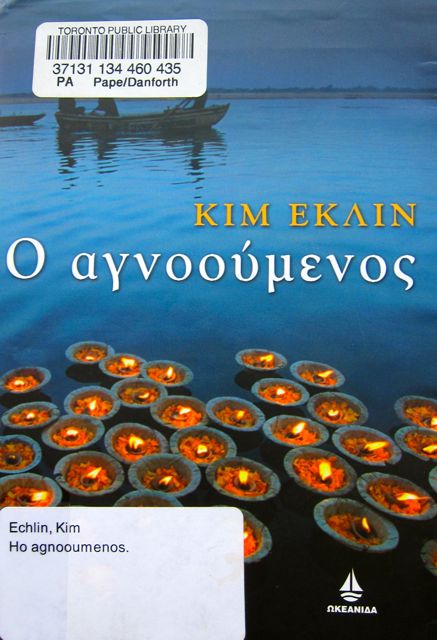 As I walked towards the Quiet Study Room at the back, I noticed a young patron sitting crossed-legged on the sill of a smaller bay window on the south wall. Because no shoes were involved in the pose, this seated tableaux didn’t bother me at all. On the contrary, I liked how she inhabited the space unconventionally, adding visual interest to the room.

I spent a few moments in the restful Study Room with its dove gray walls and dim light. Equipped with a sink and a small wooden puppet theatre, this room held lots of possibilities for coffee-fueled meetings and entertainment for the pre-coffee set.

Before I left Pape/Danforth, I took one final look at this popular and well-utilized branch. A kind employee at the information desk interpreted my gaze as an appeal for information and asked if she could help me. Shaking my head no, I thanked her and descended the artistic stairs with gratitude for her attentiveness. What I really wanted to know, though, was if my visit had made me more interesting!